The Goddess of all Business Awards 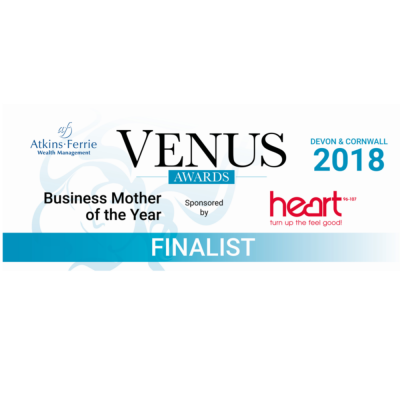 It seems that spring has finally sprung, in a windy sort of way, and to punctuate the end of the longest winter in history, we are attending the Devon and Cornwall Venus Awards. This is the first year they have included Cornwall and we are stoked to be finalists in 2 categories; Business Mother of the Year and Best Small Business. We were lucky enough to meet the other women shortlisted and this makes the achievement of being a finalist all the more incredible.

The first time we met them was at a networking event where business owners stood up to explain their work. Both Lucy and I were in awe of these women – such incredible businesses, from events management to teething beads. They had all worked exceptionally hard to build their businesses up and were now achieving great things in so many ways. Of the 10 people we met, most shared personal stories of loss, caring for family members or children, or losing everything and starting again. Lucy and I have always described ourselves as accidental entrepreneurs, feeling like all this has been some crazy misunderstanding and we’ve been swept up in a wave of someone else’s creation. And I don’t think we are alone having those doubts about our abilities. It certainly hasn’t been an easy ride to start our business – navigating motherhood, financial issues, divorce and day jobs, not to mention the small fact that we had no idea what we were doing. And when I saw these inspirational women in a room together, it didn’t occur to me that they may feel the same, until I heard their stories. I can’t help wondering whether men in business struggle with the same issues as women do, or whether being a woman is a barrier to starting a company.

It would be hard to quantify how much outward sexism we have encountered in our journey. There have been times when we felt as though we would be taken more seriously had we been men – particularly in the field of manufacturing: Travelling an hour away to meet a factory owner with two children in tow, only to arrive and be told he had gone out. Three hours later when he returned we finally got a meeting with him without so much as an apology. The suppliers we spoke to who refused to pick up the phone to us when they realised we were start up company – and this happened on several occasions. Would that have happened if we were two men? Hard to know but I suspect it would have happened less. The first person I spoke to about Halto was a business coach who shifted uncomfortably in his seat for 10 minutes then sent me away because he didn’t think it would be a problem that needed dealing with. Coming face to face with Touker Suleyman, he asked us how we were affording our ‘make-up and shoes’. I can’t imagine him asking any man the same sort of question.

Talk to any woman in business about everyday sexism and I bet they will be able to give you examples from their own experience. And through talking to the other business owners we could see the struggles they have faced trying to launch businesses while raising children. Just as ours have, their children became an integral part of their businesses. Most women worked from home, one lady built a wooden outhouse in the garden so she could work and look after the kids. For us, we worked late in the evening after the kids had gone to bed, we worked in soft play centres and even had business meetings at the ball pool so the kids were entertained while we talked shop. Both of our children have been everywhere with us, which is far from ideal at times. And often people don’t take us seriously because of it. I understand that turning up to a business meeting with two children in tow may seem unprofessional. But when you unpick it further you will realise that no one is more dedicated to making her business work than someone who is turning up, having got her kids up, dressed, fed, with car snacks, spare clothes and nappies packed, and if she’s lucky will have managed a shower and some toast for herself. And not only that, but she is also able to listen in the meeting, taking notes, contributing and thinking about her business while simultaneously wiping noses, doing toilet runs, putting biscuits in mouths and playing ‘what’s the smell’. Until you’ve had a 3 hour meeting with the founder of a multi-million pound company in a soft play centre on the morning of ‘bongo babes’ you should not have an opinion on how seriously to take a mum setting up her own company.

I think for us, we have had to be creative in the way we handle being women in business. We have the double whammy (excuse the pun) of also talking about boobs, which comes with its own set of problems when it comes to being taken seriously. For example, a number of times we have sat down in front of men who have not understood the product and have squirmed uncomfortably as we talked. It is funny to watch a grown man not know what boob-related word to use and stutter and mime with his hands almost unconsciously. As if miming a cheeky boob squeeze or pointing to my chest  is in any way an improvement on any of the plethora of descriptive words to describe breasts. So we realised early on in our journey that we needed a clever way to demonstrate the problem; enter the weighted bikini. Men were asked to wear a weighted bikini for the first 10 minutes of the meeting to demonstrate the problem and to garner sympathy for the product we were trying to make. We still use them to this day, they have been so effective. They have also been used as a gif, which is amazing for such prolific gif lovers as ourselves.

I think the most overwhelming thing we had in common with all these lovely ladies was the feeling of being imposters in our own business. That somehow we had fluked being there but were not really qualified for the job, even though we created the job specifically for ourselves. And looking at these women it would be impossible to think that they had any doubts because the marvellous job they were doing. One lady spoke about her company as if it had started purely by chance, based on referrals from friends and she was astounded that she now employed several people and had a number of high profile clients relying on her. The reality of course is that she has landed those clients because she is excellent at what she does and has worked really hard to build her company up.

Why do we as women struggle so much with a lack of belief in ourselves? It is said that a man will apply for a job if he feels he has 60% of the criteria, whereas women feel they need 100% in order to apply. Sophia Mohr* suggested that this may be because a woman feels failure is more unpleasant an outcome than men, and also that girls are taught to obey rules more strictly the boys. As new business is about taking risks, this is a big explanation as to why men are twice as likely as women to start their own businesses**. And yet, it seems that this gap is closing. Female entrepreneurship is growing fast and there is evidence to say that female founded companies tend to be more successful*** which is excellent news for businesswomen, and the business community as a whole. After all if we can get the best people founding businesses – regardless of gender – those businesses will surely be all the better for it..

So to all women out there, the message is this. Don’t let imposter syndrome hold you back. We need people in business who will be creative, dynamic and who will have good ideas. If you feel like you’re not good enough to succeed, take solace in the knowledge that everyone feels that way, the only difference is that some people close their eyes, take a deep breath and do it anyway. Failure isn’t unusual or something to be scared of. The most successful business people have had businesses that failed, but they learnt from it and have carried on regardless. And know that in a room full of amazing businesswomen, such as the Venus Awards, we will still be sitting there wondering how on earth we managed to be shortlisted, just like every other woman in there!

If you enjoy our blogs and want to continue hearing from us, make sure you have signed up to our newsletter or re-opt in before email regulation changes come into force on May 25th.